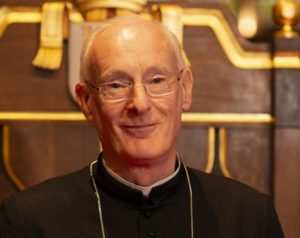 Peter was born in Guildford in 1959 and educated at Lyndhurst School and RGS Guildford, followed by a degree in German and Russian Language and Literature (with subsidiary Theology) in London and Heidelberg.  After graduation, he spent four years teaching as pastoral and practical experience, in order to test and confirm the vocation to Christian priesthood which he had discerned very early in life.

After three years of theological study in Oxford, Peter was ordained into the Diocese of London, serving as a curate in the parish of St Martin, Ruislip.

On leaving Ruislip in 1992, Peter was called to serve in the Royal Army Chaplains’ Department.  His ministry has therefore been primarily to soldiers and their families.  He spent ten years as a Regimental Chaplain to infantry battalions, ten years as a Brigade and subsequently Divisional Senior Chaplain, and five years in Army Headquarters at Directorate level.  Highlights included counter-terrorism and public order duties in Belfast and County Tyrone, a UN tour in Kosovo, service in Iraq as Senior Chaplain 12 Mechanised Brigade, and deployment to Afghanistan as Senior Chaplain 16 Air Assault Brigade for the first operations in Helmand in 2006.  He attended the Royal College of Defence Studies in 2103-14, and left the Army as Deputy Chaplain-General in 2017 upon appointment as Bishop of Sodor and Man.

Peter is married to Gail, whom he met in the parish in Ruislip.  They became engaged as Peter was leaving the parish, and their first married home was a military quarter in Germany.  Subsequent postings included York, Catterick, Belfast, Chepstow, Aldershot, Salisbury Plain, Colchester, London, Edinburgh, and Germany again.  They have a son who graduated in modern languages and now work as a publishing editor.

Called by the Church in 2017 to be Bishop of Sodor and Man, Bishop Peter now has care of the smallest diocese in the Church of England, but one of the very oldest.  Christianity was brought to the Isle of Man by St Patrick, and the Island’s first bishop was recorded in the year 447.  It is thus a Celtic diocese within the Church of England.  It also has significant heritage from the period of the Norse hegemony a thousand years ago, including Tynwald, ‘the world’s oldest continuous parliament’, in which the bishop still sits every week.  The Diocese now consists just of the Isle of Man: the ‘Sodor’ (‘Southern Isles’ or Latin Sodorensis, being the Hebrides, as opposed to the ‘Nordor’ of Shetland and Orkney) now belong to the Scottish Episcopal Church, but the Manx Diocese retains its ancient title.

Peter is Episcopal Visitor to The Gabriel Sisters (a dispersed religious community) and to The Church Lads’ and Church Girls’ Brigade.  As Co-Chair of the Anglican –Old Catholic International Co-ordinating Council, he leads for the Church of England on our conversation and dialogue with the Old Catholic Churches of the Union of Utrecht.