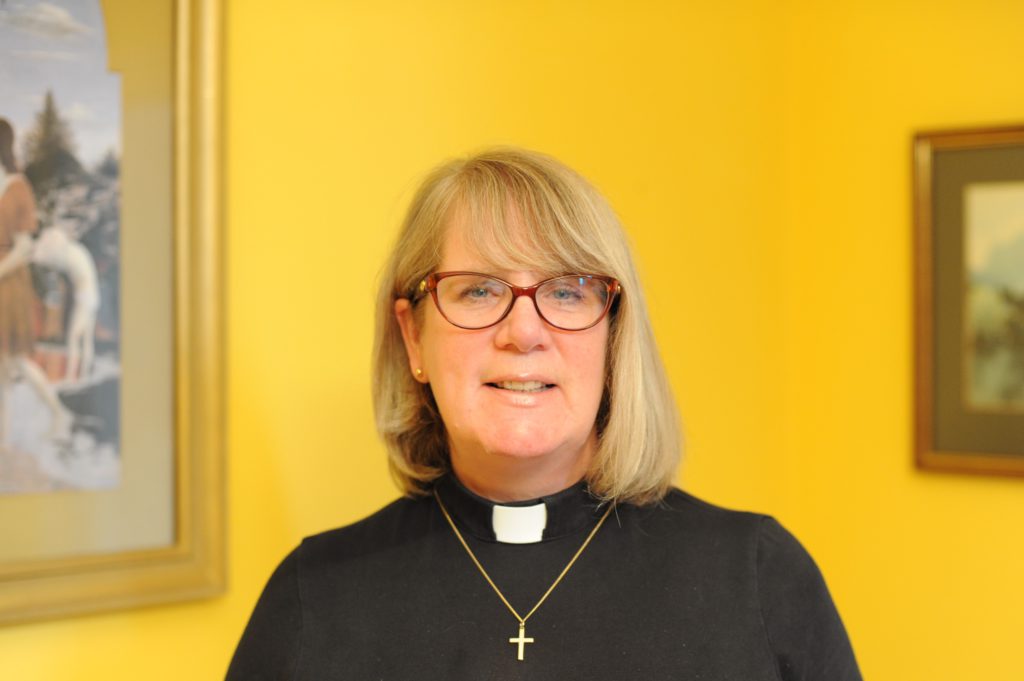 The Bishop is very pleased to announce the appointment of The Revd Lynn Davidson as Priest-in-Charge of the Parishes of Bride, Lezayre & North Ramsey, and Maughold & South Ramsey, and as Team Leader of the Northern Mission Partnership.

Lynn, with her husband Kenneth, comes to us from the Parish of Christ Church, Morningside, Edinburgh, in the Scottish Episcopal Church.  Lynn’s appointment brings to a conclusion the lengthy interregnum in these two northern parishes, and it will be a joy to welcome her to her new ministry at a date to be confirmed in late March.  It is intended that Lynn will be licensed initially as Priest-in-Charge, to become Incumbent following the implementation of the pastoral scheme currently under consultation to unite the two parishes.

I invite you to join with me in thanksgiving as we look forward to Lynn’s ministry in the north of our Island, and to share with me in prayer for Lynn and Kenneth as they prepare to move to Ramsey in early March.  Deo Gratias.

I was born and grew up in Glasgow before moving to Warwickshire when I was in my early twenties.

I am married to Kenneth and we have four adult sons.

Before ordination, I had a career in Social Work, and have held a variety of roles, including managing safeguarding teams and disabled children’s services.  Working alongside so many people who are disadvantaged by their circumstances has given me an awareness of and concern for justice issues.  Seeking to serve those on ‘the margins’ has been an important part of my ministry.

Having first sensed God’s calling to ministry when I was a member of a Baptist church, I trained for Baptist ministry, studying for one year at Spurgeon’s College in London and two years at Regent’s Park College, University of Oxford.  I was inducted to my first Baptist Pastorate in Hertfordshire in 2008.  I became aware however, of a growing sense that I should be exploring ministry in the Church of England.  During 2013, by which time I was leading a Baptist/URC local ecumenical partnership church in London, I began a process of discernment with the Church of England.  This led to me undertaking a short period of ‘Anglican formation’ at Ridley Hall Cambridge.

I was ordained Deacon in Lichfield Cathedral in 2014 and Priest in 2015.  After completing a short curacy in Shrewsbury, I returned to London in 2016 to become Priest in Charge of Whetstone Parish Church.    Alongside my parish responsibilities, I have held a number of Diocesan positions that have enabled me to use my previous professional skills in my ministry, including Sub-Dean of Central Barnet Deanery, Safeguarding Support for the Edmonton Episcopal Area, Canon C4 Coordinator, and Domestic Violence Awareness trainer for the Diocese of London.   I was an elected member of Diocesan Synod before moving to my current post as Rector of Christ Church, Morningside in the Diocese of Edinburgh.

We lived and worked on the Isle of Man in the early 2000’s, and have continued to visit throughout the years.  I was baptised on the Island, and for both Kenneth and I, it is a place that has played an important part in our faith journeys.  We are delighted to be returning to live on the Island.  As keen walkers, we are looking forward to revisiting all the beautiful places we know so well.

I am excited about the invitation to minister on the Isle of Man, and I look forward to exploring missional opportunities to engage with others, to make the love of Jesus known in the North of the Island.