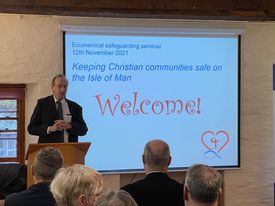 Following the great success of previous Ecumenical Safeguarding Seminars a further event looking at how the Churches of the Island  can connect to further Community Resources took place on Friday 12 November at St John’s Mill, St John’s. The event began with an introduction from Tony Connell the Island’s Ecumenical Safeguarding Advisor as he welcomed over 30 delegates.

This was followed by an opening address which was led by The Reverend Doctor Michael Brydon, Bishop’s Chaplain. He commented on the uniqueness of ministry on the Island and the hope that that ministry should be set against. He went on to say that Christian hope sets everything that is faced against the understanding that in the end all will be well and that that is the hope of the gospel in building up communities. 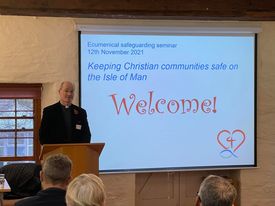 This address was followed by a session from Paula Gelling, Manager of Victim Support Isle of Man who introduced the provision that is on offer and their work undertaken and how that looks as a key agency. The work undertaken includes witness support and victim of crime support and in many other ways. With no particular referral route Victim Support are  there to provide support from new events to historic events and  are not limited in the number of sessions that can be provided for. The primary function is that of keeping victims safe and secure and the importance of them feeling safe.

The second session of the morning was led by Andrea Chambers Chief Executive of Isle Listen who offer planned interventions to those in need of support when facing issues of mental health. Isle Listen fills the gap that exists in state provision via their well being practitioners and psychotherapists. Isle Listen do work with young people throughout the Island’s 37 schools offering the provision of a listening and support service. This provision also links in with the government’s CAMS service where further intervention is required.

Andrea told those gathered that there is a crisis in mental health and there is need for this provision and to bridge this gap and that Isle Listen is now looking at linking further with Manx Care to improve the offering available to support those impacted by these mental health issues. A good example of the voluntary sector supporting the state sector.

The third session was led by Jackie Bridson Chief Executive of Live at Home who introduced the work of  the charity which was established in 1998 to provide lots of ways for their members to live happily at home for as long as they can. With an aim to improve life quality and eliminate isolation and loneliness among older people on the Island Jackie explained how they mainly communicate with members by telephone and in person to maintain pastoral contact. 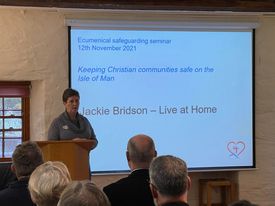 Tony Connell led the fourth session on Social Cohesion and the role of the church within that framework. He talked about the place of the church in our communities and the need for providing care, support and compassion and linking in with the other agencies such as Victim Support, Isle Listen, Live at Home and other supportive groups. He looked at how this might work and how all can work together to support those in need.

This part of the morning saw delegates take part in some  group work looking at what cohesion might look like as all strive to work together going forward. This session concluded with a video of polar bears washing their laundry highlighting the need for  cohesion and illustrating how all involved can work together.

The fifth and final session was led by Christie Sayle, Detective Inspector, Isle of Man Constabulary and she gave an insight into how the role of the Police in the community and  interlinks with the other provisions available and in particular the work of the Multi Agency Public Protection Unit (MAPPU). Christie explained that MAPPU is a team of Police Officers and support staff who work closely with Manx Care, the Prison and Probation Service, and Health and Education.

Their work covers adult and child safeguarding, licensing for firearms and alcohol, domestic abuse, the management of sex offenders, the intervention needed for vulnerable adults and intervention work with young people potentially heading for a life of crime. Anyone with any concerns in any of these areas can refer to MAPPU directly or via Tony Connell and seek their support.

Following a question and answer session the Bishop of Sodor and Man, The Rt. Reverend Peter Eagles, summarised the whole morning thanking all who had contributed to an interesting and informative event.