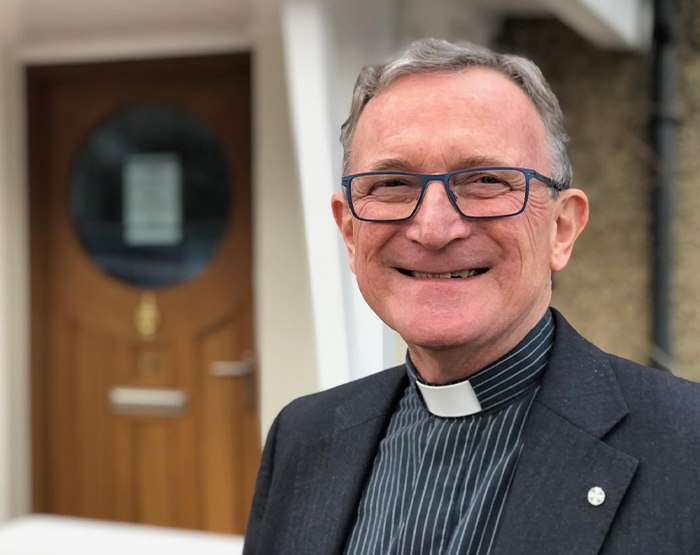 The Archdeacon of Man, the Venerable Andie Brown, has announced that he will retire as of his 66th birthday this September after 41 years in ordained ministry. Andie and Jane will return to live in south Derbyshire where they left two daughters, their husbands and grandchildren when they moved here.

Andie came to the island ten years ago from the Cathedral and the Diocese of Derby where he saw the advertisement in the Church Times for the post of Archdeacon of Man and Vicar of St George’s Douglas. Upon reading it he turned to his wife Jane and said “That’s my job!”, so immediate was the sense of God’s call to this role. Thankfully, he notes, the then Bishop, Robert Paterson, agreed, and he was offered the post in April 2011.

Upon his arrival he was asked to assist in leading the parishes forward in a programme of extensive pastoral re-organisation. As Bishop Robert left, he asked Andie to convene a working party to undertake a strategic review of the diocese’s buildings to enable the new bishop and the Church Commissioners to better direct the diocese’s resources to where they would be needed most in the 21st century, and this is now our diocesan policy.

As archdeacon he has helped to put the diocese on a more professional footing to help us to meet the 21st century’s demands for transparency and accountability e.g. he pushed for the appointment of our first Diocesan Secretary.

With the help of an his extremely capable but very part-time Secretary, Mrs Michelle Barwood, they have set up a professional Archdeacon’s Office which will be fit to hold the fort during a short interregnum.

He has chaired at various times most of the major diocesan business committees and sat on all of them and other diocesan committees and task groups and a couple of government committees where the Archdeacon of Man now sits in an ex officio capacity.

He believes the title ‘Archdeacon of Man’ opens doors a Vicar might find remained closed, and he has used this advantage wherever possible. He helped set up Street Angels ministering to the night-time economy of Douglas.

As Vicar of St George’s (and now the Parish of St George’s and All Saints) he was mandated at his Induction: to develop St George’s to be the Civic Church of the Capital Town, which they have done. Being sometimes Mayor’s Chaplain, and the Chaplain of the House of Keys has been an asset in this, as has inheriting the role of Padre to the Isle of Man County Royal British Legion and the Royal Air Forces Association; to use the building 7 days a week: their PCC don’t charge non-profit groups for the use of the church building, but encourage all and sundry to see the church as a community asset that all could use, and many groups do: to encourage a wider age profile in the congregation, and St George’s and All Saints now has several thriving children’s ministries and many young families: to develop the range of worship offered; they have developed a lively and interactive monthly All Age Praise, and also All Age Holy Communions, helped by having installed a state of the art audio-visual set up with a sophisticated Sound Desk and multiple HD screens around the building all managed from the sound desk. They have developed the War Memorial Chapel, so this space can be used for Taizé prayers, Celtic Communions and other smaller, quieter services; and to develop lay leadership – although even with the excellent lay leadership at St George’s with All Saints, to whom he delegates a good deal and a superb lay-led Pastoral Care Team, the parish still thinks the double role of archdeacon and vicar of a busy church needs a part time or non-stipendiary Assist Vicar to share some of the load as the role has been overwhelming since Alessandra was “lent for a year” to Onchan.

Andie notes that it has been a very busy and happy 10 years on the island during which he has learnt a very great deal about being a disciple of Jesus from all the Christians he has encountered in all the denominations of the island with whom he has worked closely in Churches Alive in Mann. He notes that “This, my final stipendiary ministry, has been a huge privilege and, on the whole, hugely enjoyable. It has had sufficient challenge to constantly stretch me, and enough reward to make it all feel worthwhile”. He has enjoyed serving alongside two very different bishops. He has enjoyed working with two very different but gifted curates in Jeanette Hamer and Alex Brown. He will miss so much about the island and his ministry here, but especially our coasts, our people, the fellowship and worship at St George’s with All Saints, and its beautiful church building. He is looking forward to taking a break from public ministry and re-connecting with Christ in quieter ways, as well as being lazy, walking, bird-watching, gardening, reading and having a season ticket for his beloved Burnley Football Club.

Archdeacon Andie has been a great support to me, throughout my time as bishop.  I have valued both his pastoral heart and his desire to ensure the professional footing of the diocese.   He will be especially missed in the parish of St George’s and All Saints, Douglas, where he has both reached out to the wider community and nurtured the regular congregation. As Chaplain to the House of Keys he has played a valued part in the life of the Island and it is largely down to him that the Archdeacon of Man now serves on several government committees.  I wish Andie, his wife Jane, and all their family a happy retirement in Derbyshire.